Redox regulations in physiological and pathological processes of cell and organism

Mitochondrial uncoupling proteins (UPCs) contribute to the dissipation of the protonmotive force that drives the production of chemical energy in the form of ATP. Mild dissipation of the protonmotive force is associated with a reduced production of reactive oxygen species (ROS). Because the function of UCPs is dependent on the presence of free fatty acids, besides the regulation of UCP function we also study the regulation of function of mitochondrial phospholipases, which participate in cell signaling by simultaneously producing free fatty acids and lysophospholipids. In our laboratory, we began to study the link between the function of mitochondrial uncoupling proteins and mitochondrial phospholipases. Specifically, we test the hypothesis that mild oxidative stress induces mitochondrial phospholipase iPLA2 activity and initiates the UCP2-dependent dissipation of protonmotive force, and this synergy of iPLA2 and UCP2 subsequently leads to a decrease in ROS production. Our results to date are consistent with the presence of redox regulated mitochondrial iPLA2 and support the hypothesis outlined above, consistent with UCP2-dependent feedback attenuation of oxidative stress. 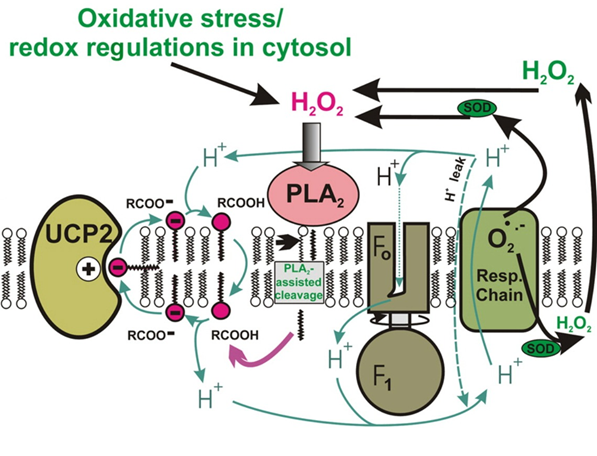 β-cells of pancreatic Langerhans islets are vitally important for keeping proper blood glucose in the organism.  Upon increased glucose level in the blood   the β-cells initiate insulin release. The textbook mechanism of insulin release starts on plasma membrane, where glucose transporters import glucose being further processed in glycolysis to pyruvate, the substrate of mitochondria, which consequently produce cellular ATP. Increased ATP/ADP level in the cell then inhibits K ATP sensitive channel in plasma membrane causing membrane depolarization. This opens potential sensitive L-type of calcium channel enabling calcium intake. The increase of calcium in the cell initiates release of insulin vesicles into the blood. Thus insulin release mechanism is based on mitochondrial bioenergetics. Besides ATP production, mitochondria are known to be one of the biggest cellular sources of oxygen radicals. Initiation of this production consequently signals to cytosolic sources and thus set the intracellular redox homeostasis. This can play important role in insulin release. We have found that after glucose addition to β-cells, their intracellular compartment is highly oxidized. The aim of the project is to find the exact oxidative source upon glucose addition and to uncover the mechanism of its action on insulin release. Such knowledge will be essential for understanding of redox disbalance in type 2 diabetes.

Pulmonary hypertension (PH) is a complex disease ultimately leading to heart failure and early death of patients. Despite the significant progress in diagnosis and treatment the mortality keeps on a high level. PH is characterized by dramatic remodeling and thickening of the distal pulmonary artery wall accompanied by inflammation leading to local high blood pressure. PH results from a multi-step process, which is now believed to be caused by genetic reprogramming of gene expression patterns. In line with emerging concept that PH shares key features with cancer, we found that pulmonary arterial fibroblasts from chronically hypoxic hypertensive calves exhibit a highly activated pro-proliferative, pro-inflammatory phenotype. Aim of this project is to explore mitochondrial metabolism of arterial fibroblasts and smooth muscle cells and changes in their bioenergetic state. This topic is being investigated within collaboration with Prof. Kurt R. Stenmark (University of Colorado, Denver).

Role of mitophagy in type 2 diabetes

Autophagy (from greek „self-eating“) significantly contributes to turnover of insulin and/or insulin secretory granules, respectively. It is known that only a minor portion of insulin granules are secreted by β-cells of Langerhans islets and major portion remains retained as storage. Half time stability of such storage granules varies only 3 – 5 days and subsequently undergoes degradation by processes that may include enzymatic cascade related to autophagy. Autophagy together with other intracellular self-cleaning processes is significantly involved in balancing glucose-stimulated insulin production and subsequent secretion. It is known that compounds either stimulating or blocking autophagy can induce diabetes (e.g. rapamycin). That is why any intrinsic or extrinsic intervention into dynamic equilibrium of autophagy with high probability results in initiation of this (nowadays population) disease accompanied by lethal complications. The level of mutual relationship between autophagy of insulin secretory granules and autophagy of other intracellular organelles such as  mitochondria (mitophagy) remains to be investigated within this project.