Testing of new possibilities for the treatment of obesity


Scientists of Dept. of Experimental Hypertension is working with a group of Lenka Maletínská from IOCB CAS in the development of unique drugs for the treatment of obesity.

Obesity is currently a worldwide threat, since it is associated with increased incidence of type 2 diabetes, hypertension, cardiovascular diseases, etc. Regulation of food intake and energy expenditure is a complex process and is therefore very difficult to find an optimal medication. Peptides which are secreted and active in the gastrointestinal tract or in the different parts of the central nervous system, mainly in the hypothalamus, play very important role in the natural regulation of food intake. Many of these substances are already known for quite a long time, but the mechanism of their action and interaction is still little known. Peptides as therapeutics have some advantages and disadvantages. The advantage is that they are endogenous substances which are easily degradable in the body. This property is at the same time the disadvantage in terms of the therapy, because they are very rapidly cleaved enzymatically. They are also digested in the stomach and thus can not be administered orally. Therefore, modified analogues of these peptides have been developed for therapeutic purposes, in order to increase their activity and resistance to rapid degradation.

In cooperation with dr. Lenka Maletínská group from the Institute of Organic Chemistry and Biochemistry ASCR, where lipidized analogs of neuropeptide prolactin releasing peptide (PrRP) were synthesized, we studied the properties of these analogs in vitro (binding to receptors, stability in plasma, etc.) and their effect on food intake in rodents after peripheral administration. We found a very strong binding to the cells expressing PrRP receptor. Peripheral administration of palmitoylated PrRP to fasted mice led to long lasting reduction of food intake, which was associated with an increased neuronal activity in brain areas involved in the regulation of food intake. Long-term administration of analogs in obese mice resulted in decreased food intake, weight loss and normalization of some metabolic parameters. The results clearly showed that lipidized analogues of PrRP could become attractive candidates for the treatment of obesity. 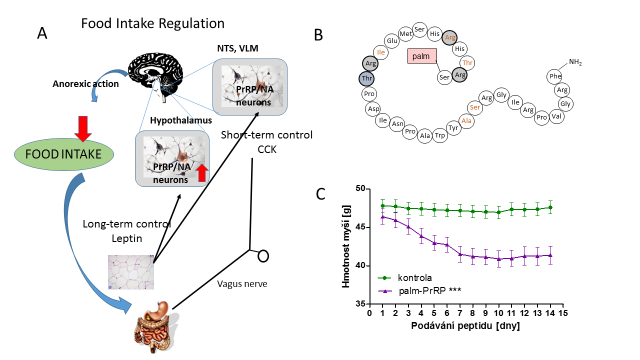