Correlation between resistance to obesity and lipid synthesis in adipose tissue


Cold exposure induces lipid synthesis in white adipose tissue; the ability to induce this process correlates with differential resistance to obesity of various strains of laboratory mice. Propensity to obesity is partially dependent on the intristic metabolic properties adipose tissue.

Propensity to obesity depends on the genetic background of an individual. We aimed to investigate how metabolism of white adipose tissue, the accumulation of which underlies obesity, may be involved in the obesity development. We have tested differences in inducibility of adipose tissue lipid metabolism by cold exposure in mice of two strains  that differ in their propensity to obesity as well as in genetic background. After acclimatization to thermoneutral temperature (30 oC), mice of C57BL/6J strain that are prone to obesity caused by a diet with high-fat content, and mice of A/J strain, resistant to diet-induced obesity, were  exposed to cold (6 oC) for 2 or 7 days. Cold exposure resulted in a decrease of body fat content, increase of turnover of triacylglycerols (TAG) and synthesis of fatty acids (FA) in adipose tissue and increase of FA release from adipose tissue into the bloodstream; all of these changes were more pronounced in the A/J mice. Our results indicate differences in lipid metabolism in  adipose tissue of mice with different genetic background and imply a relationship between the inducibility of lipid synthesis in adipose tissue and resistance to obesity. The capacity of adipose tissue to synthesize lipids and release FA into the bloodstream may limit the ability of other tissues to oxidate FA; these mechanisms influence heat generation in the cold, as well as  accumulation of body fat under the conditions of excessive energy intake. 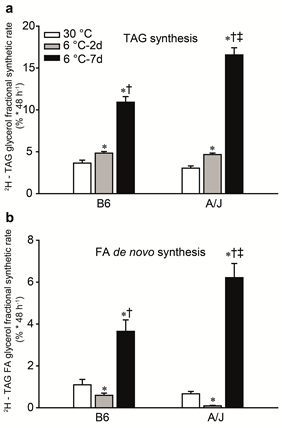