Glucose tolerance represents a complex phenotype in which many tissues play important roles and interact to regulate metabolic homeostasis. Here, we perform an analysis of 13C6-glucose tissue distribution, which maps the metabolome and lipidome across 12 metabolically relevant mouse organs and plasma, with integrated 13C6-glucose-derived carbon tracing during oral glucose tolerance test (OGTT). We measure time profiles of water-soluble metabolites and lipids and integrate the global metabolite response into metabolic pathways. During the OGTT, glucose use is turned on with specific kinetics at the organ level, but fasting substrates like β-hydroxybutyrate are switched off in all organs simultaneously. Timeline profiling of 13C-labeled fatty acids and triacylglycerols across tissues suggests that brown adipose tissue may contribute to the circulating fatty acid pool at maximal plasma glucose levels. The GTTAtlas interactive web application serves as a unique resource for the exploration of whole-body glucose metabolism and time profiles of tissue and plasma metabolites during the OGTT.

MetaboAtlas21 is a comprehensive atlas of the mouse metabolome and lipidome.

Use of [4-2H]-glucose for metabolic labeling of NADPH.

[4-2H]-glucose can be used as a malic enzyme tracer, which specifically labels NADPH’s redox active hydrogen. The deuteron from [4-2H]-glucose is passed to NAD2H by glyceraldehyde 3-phosphate dehydrogenase (GAPDH) during glycolysis. This cytosolic NAD2H can be used by cytosolic malate dehydrogenase 1 (MDH) to convert cytosolic oxaloacetate (coming from citrate cleavage by ATP citrate lyase) to cytosolic [2-2H]-malate. This deuterated malate can be either transported to mitochondria or converted by malic enzyme 1 (ME1) to cytosolic pyruvate and cytosolic NADP2H. This NADP2H represents the energy for DNL. During the synthesis of a fatty acid from acetyl-CoA units (via malonyl-CoA), two NADPH molecules are used per one C2 unit. The fatty acid labeling is the result of two stochastic hydrogen selection processes, with 1/3 of hydrogens coming from water and 2/3 coming from NADPH. If cytosolic NADP2H is present, contribution of malic enzyme 1 NADPH to fatty acid synthesis can be measured. 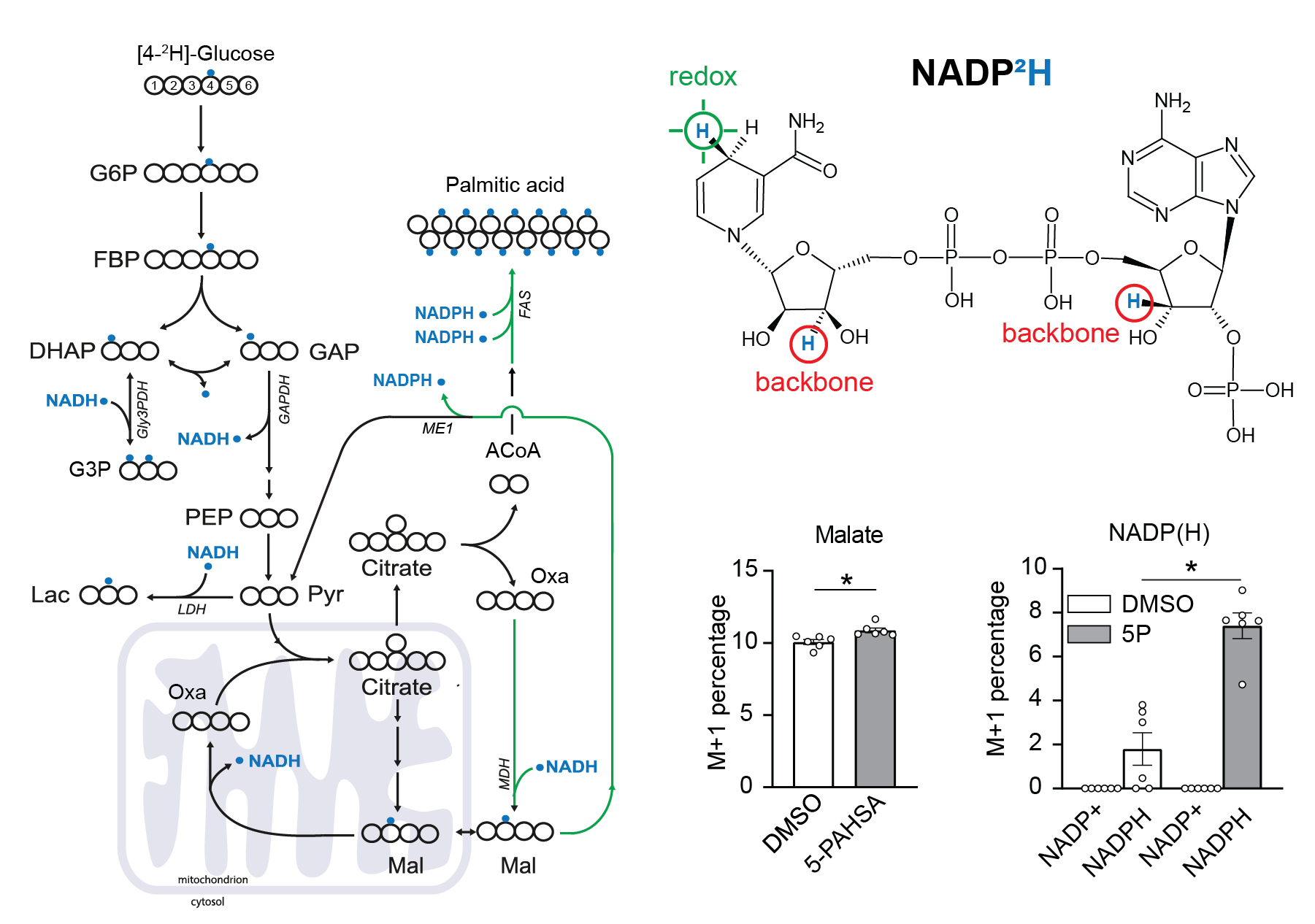 For the simple synthesis of TAGs, glycerol phosphate and acyl-CoAs are needed. WAT is virtually lacking glycerol kinase, thus all glycerol phosphate has to be synthesized either via glycolysis (green path) or glyceroneogenesis (pink path). During glycolysis, deuteria (up to 3, M+3) could be incorporated from water within the equilibrium between Glyceraldehyde-Ⓟ, Dihydroxyacetone-Ⓟ, and Glycerol-3-Ⓟ. The alternative glyceroneogenic pathway precursors are deuterium-labeled within the Krebs cycle and further during conversion of Phosphoenolpyruvate to Glyceraldehyde-Ⓟ. This path may incorporate up to 5 deuteria per glycerol after several turns of the Krebs cycle. The intermediates labeled with deuteria within the Krebs cycle may also enter the de novo lipogenic pathway (blue path) as labeled Acetyl-CoA. The first (and future terminal methyl group) Acetyl-CoA keeps the deuteria, while the later Acetyl-CoAs are converted to Malonyl-CoAs and lose one deuteria from the Krebs cycle. During the elongation process of the acyl-intermediate, NADPH+H+ provides additional deuteria equilibrated from body water, thus potentially increasing the enrichment (red path). Finally, both glycerol phosphate and newly synthesized palmitate can form TAG. The degree of enrichment of the final TAG might be diluted by the contribution of FA re-esterification / lipolysis or import of external fatty acids. There are up to 6 metabolically different hydrogens, which could be exchanged for deuterium in a simple TAG.

Background Cachexia worsens long‐term prognosis of patients with heart failure (HF). Effective treatment of cachexia is missing. We seek to characterize mechanisms of cachexia in adipose tissue, which could serve as novel targets for the treatment. Methods The study was conducted in advanced HF patients (n = 52; 83% male patients) undergoing heart transplantation. Patients with ≥7.5% non‐intentional body weight (BW) loss during the last 6 months were rated cachectic. Clinical characteristics and circulating markers were compared between cachectic (n = 17) and the remaining, BW‐stable patients. In epicardial adipose tissue (EAT), expression of selected genes was evaluated, and a combined metabolomic/lipidomic analysis was performed to assess (i) the role of adipose tissue metabolism in the development of cachexia and (ii) potential impact of cachexia‐associated changes on EAT‐myocardium environment. Results Cachectic vs. BW‐stable patients had higher plasma levels of natriuretic peptide B (BNP; 2007 ± 1229 vs. 1411 ± 1272 pg/mL; P = 0.010) and lower EAT thickness (2.1 ± 0.8 vs. 2.9 ± 1.4 mm; P = 0.010), and they were treated with ~2.5‐fold lower dose of both β‐blockers and angiotensin‐converting enzyme inhibitors or angiotensin receptor blockers (ACE/ARB‐inhibitors). The overall pattern of EAT gene expression suggested simultaneous activation of lipolysis and lipogenesis in cachexia. Lower ratio between expression levels of natriuretic peptide receptors C and A was observed in cachectic vs. BW‐stable patients (0.47 vs. 1.30), supporting activation of EAT lipolysis by natriuretic peptides. Fundamental differences in metabolome/lipidome between BW‐stable and cachectic patients were found. Mitochondrial phospholipid cardiolipin (CL), specifically the least abundant CL 70:6 species (containing C16:1, C18:1, and C18:2 acyls), was the most discriminating analyte (partial least squares discriminant analysis; variable importance in projection score = 4). Its EAT levels were higher in cachectic as compared with BW‐stable patients and correlated with the degree of BW loss during the last 6 months (r = −0.94; P = 0.036). Conclusions Our results suggest that (i) BNP signalling contributes to changes in EAT metabolism in cardiac cachexia and (ii) maintenance of stable BW and ‘healthy’ EAT‐myocardium microenvironment depends on the ability to tolerate higher doses of both ACE/ARB inhibitors and β‐adrenergic blockers. In line with preclinical studies, we show for the first time in humans the association of cachexia with increased adipose tissue levels of CL. Specifically, CL 70:6 could precipitate wasting of adipose tissue, and thus, it could represent a therapeutic target to ameliorate cachexia.