The emergence and course of neurodevelopmental and neuropsychiatric disorders are strongly linked to genetic alterations (de novo or rare mutations) that compromise the function of the glutamatergic signaling complex. It is estimated that some form of autism spectrum disorder (ADS) affects nearly 1% of the population, intellectual disability (ID) 2%, attention deficit hyperactivity disorder (ADHD) more than 2% of children and adults, and in the case of neuropsychiatric disorders like schizophrenia (SCH) about 1-1.5% of the population worldwide is affected.

Genome-wide association studies  on different cohorts of patients identified a significant number of single nucleotide variants in genes of the NMDAR signaling complex, including many de novo mutations located in NMDAR exons. However, precise functional validation of these mutations is time and technically demanding, thus only a relatively small portion of the identified mutations were functionally analyzed to date, despite the fact that such data would significantly improve our knowledge of NMDAR function and could suggest pharmacological treatment to improve patient outcomes.

We use a combination of electrophysiology, pharmacology, structural biology, biochemistry and microscopy to elucidate the functional role of unexplored mutations in GluN2A and 2B NMDAR subunits found in children diagnosed with epilepsy, intellectual disability or autism. We will (i) assess the functional properties of mutated NMDARs including their pharmacology, (ii) study the effect of each mutation on the NMDAR assembly, trafficking to the membrane and synapse localization and (iii) using our structural models and in-silico approaches we will test the influence of specific mutations on the receptor structure and mechanism of function. 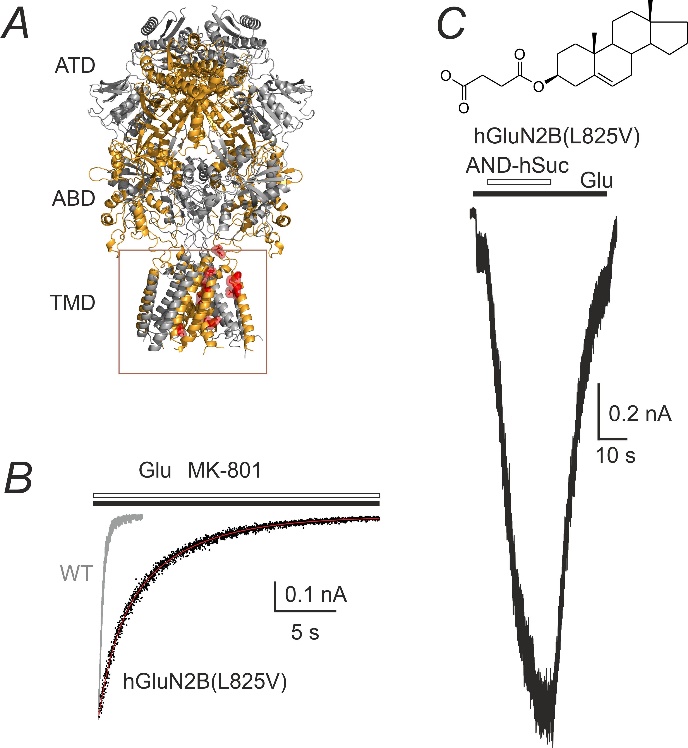 (A) Ribbon structure of a homology model of the GluN1/GluN2B receptor.  Selected residues representing AA that were altered in human patients are highlighted in red; TMD - transmembrane domain. (B) The time course of the onset of MK-801 inhibition was best described by the probability of opening (Po) = 12.2% for WT receptors and (Po) = 1.16% for hGluN1/hGluN2B(L825V) receptors. (C) Androst-5-ene hemisuccinate (AND-hSuc) potentiated the hGluN1/hGluN2B(L825V) receptor responses induced by co-application with 1 μM glutamate by 575%.