Take a pill in the morning or in the evening? The mood stabilizer lithium affects the brain differently depending on the time of day (30.1. 2023)

Lithium is an effective mood stabilizer, but the mechanism of its therapeutic effect is not well understood. Prof. Sumová's team from the Institute of Physiology of the Czech Academy of Sciences investigated the effect of lithium on the circadian clock located in the ventricular barrier complex containing the choroid plexus, which is a part of the glymphatic system that influences gross brain function via the production of cerebrospinal fluid. They found that treating mice with lithium changed the level of clock gene expression in the choroid plexus. To study the effect of lithium in more detail, they used a transgenic mouse model with a circadian reporter (mPer2LUC) to monitor the choroid plexus clock in real time. When they applied the drug to tissue explanted from the mice in vitro, the effect on the clock was highly dependent on the timing of application. Lithium delayed the clock for most of the day, but during a short window it caused phase advances. Using specific inhibitors, the authors demonstrated that the effect was not mediated via inhibition of the enzyme GSK3, a canonical mechanism of lithium, but rather via modulation of PKC activity. The results suggest a novel mechanism of therapeutic action for lithium that aligns the function of the choroid plexus clock-related glymphatic system with the sleep-wake cycle to improve brain function in psychiatric patients. Importantly, the data argue for personalized timing of lithium treatment in patients with bipolar disorder.

Heat or cold? New insights into the functioning of temperature-sensitive ion channels obtained in collaboration with Lund University (24.1. 2023)

Temperature-sensitive TRP ion channels are cellular molecular sensors involved in the transduction of sensory signals, pain perception (nociception) and the maintenance of ion homeostasis. Disturbances in their function are associated with many serious human diseases such as chronic pain, inflammation, cancer and various cardiovascular, neurological, respiratory, renal and metabolic disorders. The enormous hope of developing new drugs targeting these channels is greatly limited due to their intrinsic ability to be activated by stimuli of different modalities (polymodality), the mechanism of which has not yet been fully understood. An international team of scientists led by Prof. Peter M. Zygmund (Lund University, Malmö, Sweden), in collaboration with scientists from the Institute of Physiology of the Czech Academy of Sciences in Prague, has revealed two important mechanisms contributing to the polymodal regulation of TRP channels: The first study revealed the binding site and molecular nature of the binding of D9‑tetrahydrocannabiorcol (a natural plant cannabinoid with no psychotropic effects), which strongly facilitates the activation of TRPV2, thereby affecting the transmission of painful stimuli. The second study identified two separate specific regions that confer heat (> 35 °C) and cold (< 15 °C) sensitivity to a different receptor, TRPA1, and demonstrated that the temperature sensitivity of this receptor is critically dependent on oxidative and reducing environments. The results make an important contribution to the understanding of the general molecular mechanisms of chemical and thermal activation of TRP family channels and will find application in the search for possible approaches to their regulation by drugs. 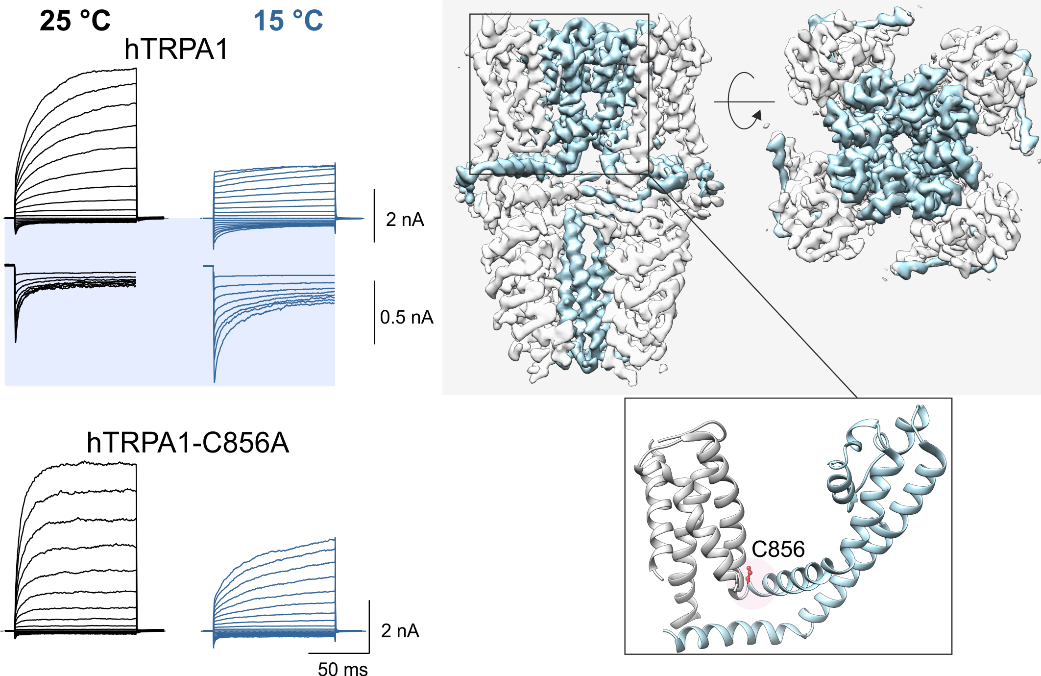 Left panel: effect of cold (15°C) on activation of the human TRPA1 wild-type ion channel and a mutant in which the major amino acid residue C856 responsible for regulation by oxidizing and reducing agents is substituted for alanine. The channels were activated by a series of voltage pulses (from ‑160 mV to +200 mV). Right panel: visualization of the TRPA1 channel structure obtained by cryoelectron microscopy (PDB: 6v9w) as viewed from the side and top. Dynamic regions of the channel responsible for cold activation are highlighted in light blue. The position of cysteine C856 is shown in the detail of the structure of one subunit below.

Sodium/proton antiporters are membrane proteins found in all living cells from bacteria to humans and play an important role in regulating intracellular pH and cation concentrations. Among these types of transporters belong also the NHA2 antiporter, whose activity affects a number of physiological functions, e.g. insulin secretion, sodium reabsorption in the kidneys or sperm motility. The NHA2 antiporter transports Na+ or Li+ cations across the membrane in exchange for H+ and its activity is specifically inhibited by phloretin. The properties and functions of all proteins result from their primary structure, i.e. from the sequence of amino acids from which the protein consists. In the family of Na+/H+ antiporters, NHA2 has a unique structure. It consists of 537 amino acids with 14 transmembrane domains and an unique hydrophilic N-terminus long 82 amino acid residues, whose structure and function have not yet been studied. Our new results published in the Protein Science journal revealed several new structural elements important for the NHA2’s function, including the unravelling a new regulatory role of the hydrophilic N-terminus.

We studied the human NHA2 protein and its mutated variants using its expression in a model eukaryotic organism, the yeast Saccharomyces cerevisiae, as well as using bioinformatic simulations (in collaboration with the laboratory of Prof. Nir Ben-Tal from Tel-Aviv University). We newly identified several amino acid residues important for antiporter selectivity (recognition and transport of Na+ and Li+ cations) and for transport of protons. Furthermore, we determined the place in the protein structure where the phloretin inhibitor binds. We also revealed that the unique hydrophilic N-terminal part of the protein has an important (autoinhibitory) role in regulating the transport activity of NHA2, because truncations of the first 50 - 70 residues of the N-terminus doubled the transport activity of the antiporter. Our results also show that the new expression system for NHA2 in yeast cells can be useful for a rapid screening of SNP´s effects on NHA2 activity, and/or to test new compounds influencing the function of NHA2, similarly as phloretin.

Characterization of novel antidiabetic drug with less side effects on bone metabolism (7.11. 2022)

Thiazolidinediones (TZDs) belong to the category of antidiabetic drugs that increase insulin sensitivity. However, the first generation of TZDs show several side effects, including increased formation of large fat cells (adipocytes) in the bone marrow associated with a higher risk of fractures and bone loss. These side effects are thought to be caused by the strong binding of TZDs to the nuclear receptor PPARγ. In a new study published in the journal Molecular Metabolism, we investigated how administration of MSDC-0602K, a new TZD analog with lower affinity for PPARγ receptors, affects bone metabolism.

We found that administration of MSDC-0602K to obese mice for 8 weeks resulted in significantly better bone microstructure and bone strength, along with an increased proportion of smaller adipocytes in the bone marrow, compared to the original TZDs. We also investigated the effects of MSDC-0602K at the molecular level using primary cell cultures. Bone marrow mesenchymal stem cells from mice treated with MSDC-0602K differentiated to an increased extent into the form of osteoblasts (bone cells), did not undergo as much aging and showed increased cellular metabolism of glutamine, which is important for bone formation (osteogenesis).

Taken together our findings suggests that the new TZD analog could increase insulin sensitivity with less adverse effects on bone quality and mesenchymal stem cell metabolism compared to the original TZDs. Thus, MSDC-0602K could replace older antidiabetic drugs in the treatment of metabolic and bone diseases.

The structure of steroids fundamentally affects their effect at the N-methyl-D-aspartate receptors (20.10. 2022)

N-methyl-D-aspartate receptors (NMDARs) are proteins involved in the regulation of many processes in the mammalian brain. They play a key role in signal transmission between nerve cells, and even a small disturbance in the NMDAR function may have sever pathophysiological effects. A reduced function of NMDARs is associated with neuropsychiatric disorders such as mental retardation, reduced intellect, schizophrenia, autism spectrum disorders, epilepsy, or motor disorders. The insufficient NMDAR function can be compensated for by numerous compounds, including neurosteroids. However, the mechanism by which neurosteroids potentiate NMDARs is not well understood.

In a study published in the British Journal of Pharmacology, we investigated the effect of newly synthesized synthetic analogues of endogenous neurosteroid pregnanolone sulfate on NMDARs. We demonstrated that analogues with short aliphatic chains, such as pregnanolone carboxylate (PA-Car), inhibit NMDAR responses, whereas analogues with longer aliphatic chains, such as epipregnanolone butyrate (EPA-But), potentiate NMDAR responses. Combining electrophysiology, molecular biology, and computational modelling, we identified the binding site for EPA-But at the transmembrane domain of NMDAR and suggested the mechanism by which EPA-But enhance the NMDAR function.

(A) Left, structure of pregnanolone carboxylate (PA-Car) and epipregnanolone butyrate (EPA-But). Right, graph shows the average effect of PA-Car and EPA-But at NMDAR. (B) Location of the EPA-But binding site at the transmembrane domain of NMDAR. Amino-acid residues that are involved in the interaction with EPA-But molecule (green) are highlighted in red.